"The Cistern": Seferis and Coulentianos 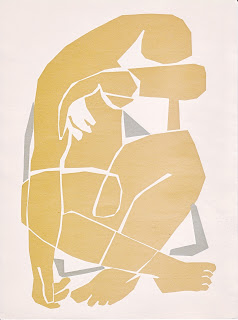 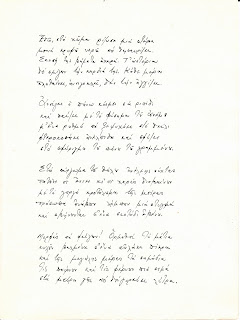 Here in the earth a cistern has taken root

den of secret water that gathers there.
Its roof, resounding steps. The stars
don’t blend with its heart. Each day
grows, opens and shuts, doesn’t touch it.
The world above opens like a fan
and plays with the wind’s breath
in a rhythm that expires at sunset
flaps its wings hopelessly and throbs
at the whistling of a destined suffering.
On the curve of a dome of pitiless night
cares tread, joys move by
with fate’s quick rattle
faces light up, shine a moment
and die out in an ebony darkness.
Faces that go! In rows, the eyes
roll in a gutter of bitterness
and the signs of the great day
take them up and bring them closer
to the black earth that asks no ransom.
George Seferis, poem one of the sequence “The Cistern”, translation by  E. Keeley and P. Sherrard.
Published in 1932, “The Cistern” marked Seferis’ abandonment of a rhymed, lyrical mode in favor of a more natural and freer one that is characteristic of all his later poems; the Greek sculptor Kostas Coulentianos (1918-1995) did some drawings for this poem which were first exhibited in Paris in 1950; in 1975 the Greek publishing firm “Themelio” issued a folio containing the drawings as well as the poem in Seferis’ own handwriting—exquisite—the poem seems to be chiseled onto the paper.
Of course I don't remember where/when I found this treasure but at least I know how much I paid for it because it’s penciled in on the last page: 300 drachmas then or approximately .80 euro now or about $1.08 as long as the US treasury lasts.
William Michaelian, eat your heart out!
Posted by vazambam (Vassilis Zambaras) at 10:39 PM 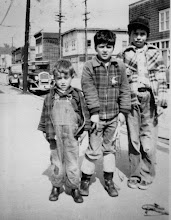